In computer science, the maximum subarray problem is the task of finding the contiguous subarray within a one-dimensional array of numbers which has the largest sum.

In this post, I’m going to talk briefly about two $O(n)$ dynamic programming solutions and some of the intuition behind them. I’ll then touch on some of the performance tests I ran between three solutions:

As per the norm with just about any dynamic programming problem, we want to maintain some structure of optimized subproblem answers to help us solve larger problem instances. First, we need to define the state of the subproblem. Then we need to forge a relationship between the original problem and the subproblem so we can see how we’ll extend the answers in our dp structure. Eventually, we want to return the sum of the maximum subarray within $A[0 \ldots n]$.

with our current model our dp array would look like:

In order to see how a previous subproblem can be extended, we need to know how the last element is going to affect the element we’re introducing. We need to know the sum of the maximum subarray ending with element $A[i-1]$. Then we can introduce $A[i]$ and decide whether it is beneficial to tack on $A[i]$ to the subproblem, or if we’d be better off counting $A[i]$ separate (if previous subproblem sum is negative). This relation between subproblems and larger instances becomes more clear and our dp array will be used to store the sum of the maximum subarray ending with element $k \; \forall \; k \in \{ 0 \ldots n-1 \}$. The dp array for the above example would look like this:

Then when we introduce $A[i]$, we know we don’t want to add it to the maximum sum of the subarray ending in $A[i-1]$ because we’d already be starting the sum at $-500$. We’ll only want to add $A[i]$ to the previous maximum sum if that sum is positive. Our dp array will then consist of peaks and valleys where the answer to our original problem is the largest of these peaks. We can maintain a variable whose value only gets updated when we see a new maximum value in the dp array, so we can return it right when we get to the end. This is another common dp pattern differing slightly from keeping a non-decreasing array of subproblem values.

We can further optimize the solution for $O(1)$ space complexity by realizing that to solve the problem for $A[0 \ldots i],$ we only need the value of the last subproblem and no data prior to it. The other tabulated subproblem answers are useless after they’ve been used once. This should tell us we can replace the array of subproblems with two variables maxSum and currentSum. currentSum acts as the ever-changing $dp[i-1]$, keeping track of the current maximum subarray ending in $i-1$. Every iteration we then update currentSum when we evaluate $A[i]$. We then update maxSum to be the larger of the two variables. Once we have the maximum value saved, we then send currentSum back to the trenches. By the end of the array, the currentSum could very well be the smallest it’s ever been, but as long as maxSum has captured the value of currentSum at its highest value that’s all we need to return. The C++ code for this problem is as follows:

A quick performance study of three solutions for this problem yields the expected results, given the time complexity for each solution. The vector each solution worked on contained random values ranging from $0-20,000$ with a $33$% chance the value was negative. The maximum size of the vector was $4,000$ elements. I originally did a max of $10,000$ elements, however, the naive $O(n^2)$ solution smashed the other solutions to the bottom of the graph due to its inefficiency. So I lightened it up a bit. 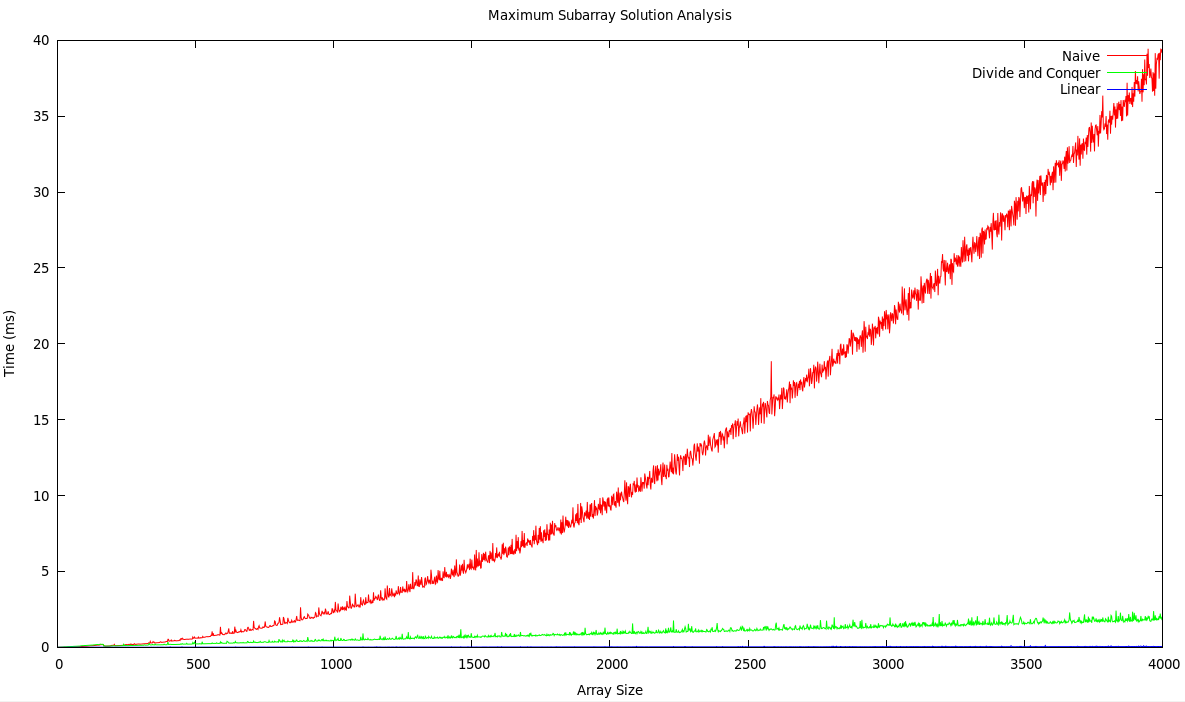